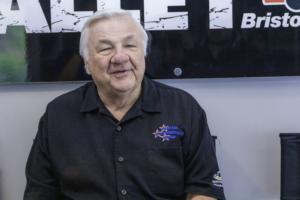 Ted Jones, a longtime drag racing executive, past manager of Bristol Dragway and president of Masters Entertainment Group, was introduced today as the 2019 Legend of Thunder Valley honoree.

Jones, who worked at Bristol Dragway for more than two decades and spent time at the iconic track over the years in many different official professional capacities, will be inducted as the newest Legend of Thunder Valley during pre-race ceremonies for the NHRA Thunder Valley Nationals on Sunday, June 16.

"This is the biggest thrill, to see my name go up there with those true legends of Thunder Valley is incredible," Jones said. "Those guys raced with me when I was the manager of Thunder Valley. They are my mentors and idols…this is unbelievable."

Jones owned several drag strips in his native Ohio and nearby Indiana before then Bristol Dragway owner Larry Carrier convinced Jones to move to Tennessee to work at his track and help manage his new drag racing sanctioning body, IHRA.

Jones excelled in his new position and during his tenure at IHRA, which had its headquarters office based at the Bristol Dragway facility, developed many new classes of competition and created innovations that are still utilized at the top levels of the sport today.

"The idea was to create a Pro Stock class with a 'run whatcha brung' mentality with big motors," Jones said. "It was an instant hit with drivers and fans and we would have 40 or 50 cars trying to qualify for a 16-car field."

Jones is credited with being the visionary who created several other innovative and popular classes that made their debuts as experimental categories at Bristol Dragway and continue to compete in NHRA today, including Pro Mod, Top Sportsman and Top Dragster. He also is recognized as the driving force who instituted the current 16-car bracket that is used for NHRA pro class eliminations and the alternate lane qualifying procedure.

After leaving IHRA and Bristol Dragway, Jones was hired by ESPN to produce drag racing television content and he started a company called Masters Entertainment Group that was based in Bristol, Tenn. Jones covered lots of NHRA and IHRA races across the country for his Inside Drag Racing show that aired on ESPN2, including many at Bristol Dragway. He also produced a show called NHRA Heat and also provided the television coverage of all NHRA Pro Mod Series races for several seasons.

Semi-retired these days, Jones stays busy helping his granddaughter with her Jr. Dragster. She competes regularly at Bristol Dragway in the DER Series, which makes Jones feel right at home when he's at the track by her side.

"My whole drag racing career has been spent here at Bristol Dragway, I really love this place," Jones says. "And now being able to help my granddaughter get started in racing here at Thunder Valley is such a thrill."

"Ted Jones has dedicated his life to making the sport of drag racing better and the majority of his innovations were conceived right here at Bristol Dragway," said Jerry Caldwell, executive vice president and general manager of Bristol Motor Speedway and Bristol Dragway. "With all that he has done to advance the sport of drag racing and for his early caretaking of Bristol Dragway as track manager and race director, he has certainly earned this honor and we are proud to induct him today as a Legend of Thunder Valley."

In addition to cheering on Jones during his Thunder Valley Legends induction ceremony, fans will have the opportunity to interact with their favorite NHRA Mello Yello Series drivers as they're granted an exclusive pit pass to the most powerful and sensory-filled motorsports attraction on the planet. This unique opportunity in motorsports gives fans direct access to the teams, allowing them to see firsthand the highly-skilled mechanics service their hot rods between rounds, and get autographs from their favorite NHRA drivers.

Fans also don't want to miss Thunder Valley's traditional Saturday evening FanFest, one of the biggest driver autograph sessions on the NHRA circuit that takes place in the pits 30 minutes after the final pro qualifying session.

To purchase general-admission or reserved seats, call Bristol Dragway at (423) 989-6900 or buy them online at www.bristoldragway.com. Tickets for kids 12 and under are free for any day with a paid adult ticket.  For a limited time, tickets can be purchased in the Tri-Cities region at any Food City grocery store.