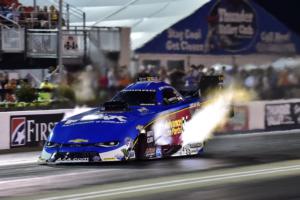 The most prolific winner in NHRA history is on the prowl for a milestone victory and if it happens to materialize this weekend at historic Bristol Dragway, it'll certainly be a Father's Day celebration to remember for the legendary John Force.

It's been nearly a year since the 70-year-old dynamo has hoisted a Wally trophy, as he claimed win No. 149 at Bandimere Speedway in Denver last July during the famed NHRA Western Swing.

He's not used to going that long between victories, so when he hits the track at Thunder Valley for the first qualifying session of the weekend on Friday evening, he'll be racing with an intensified focus at the controls of his 11,000-horsepower Peak Chevy Camaro SS. He'll get four qualifying attempts - two on Friday and two on Saturday - to qualify for the starting lineup and prepare for Sunday's eliminations, which start at noon.

"Each race we're getting this thing closer and closer to where it needs to be," said Force, who posted a semifinal finish at Topeka, Kan. this past weekend. "It's moving fast, so now we just need to go more rounds and get to the final. The PEAK guys have been putting in a lot of hard work and I know it will pay off soon."

Force had a solid weekend in Topeka, qualifying well and advancing to his sixth semifinal effort of the season where he lost to eventual runner-up Jack Beckman. Prior to that, his other season highlights have included racing to No. 1 qualifying positions in Houston and Richmond, Va. He is the only full-time Funny Car driver this season to not have a first round loss on his record.

Should he get the job done at Thunder Valley, a track where he has posted victories in 2013, 2010, 2007 and 2004, the resulting Father's Day celebration would be epic. If his daughter Brittany also grabs a Bristol win at the same time, the celebration would quite literally be one for the ages.

"That 150 is still out there and Brittany wants to win the race the same time I do, but it's only going to come when it comes," said Force. "I have a lot of work to do in the seat and a lot of tune-up to this car that we're working on, but Bristol could be the place. I thought it might have happened at a couple races this year, Chicago maybe and it didn't happen, so I'm excited about it."

For Force, every race weekend is all about family and that focus is magnified at Bristol given the special holiday for dads. In addition to daughter Brittany, the 2017 Top Fuel world champ, Force's son-in-law, Robert Hight, a two-time world champ, the 2011 Bristol winner and a four-time winner this season including this past weekend in Topeka, Kan., will be racing for a victory as well. Hight, who is having an incredible season and would love to grab another Bristol win and celebrate with his daughter Autumn, will certainly cheer on his mentor should he make an early exit in eliminations.

"Anytime you talk about my children, that's a positive for me," Force said. "To be at the races on Father's Day and share it with my daughters over the years, it's a good feeling. With Adria, Ashley, Courtney and now, I'll be there racing side-by-side with Brittany. When you have children it's what your life's all about, so I'm excited about it. I love the parade that they have in front of the fans where all the dads get to be with their families, it's always an honor and Bristol and Bruton Smith, they always do it right."

Force says he feels like a win is coming sooner rather than later and he's getting more comfortable with his new team members, including his new "Braintrust," Brian Corradi and Dan Hood. With all the stars aligning, and based on raw stats alone - he's won at least one race every season since 2010 -- he knows win 150 is on the horizon.

"The PEAK Chevrolet that I have is really fast," Force said. "I have to give credit to my team; all of those guys have been working hard," Force said. "There's been a lot of changes for me and I'm getting used to them still. I just have to up my game but we're ready for Bristol and hoping to get this hot rod in the winner's circle.

"Bottom line, we keep putting ourselves in a position to win," he continued. "I'm getting more confident every week. I'm using every trick I've got to run with these kids, but it is going to happen."

As always, fans will have the opportunity to interact with their favorite drivers as they're granted an exclusive pit pass to the most powerful and sensory-filled motorsports attraction on the planet. This unique opportunity in motorsports gives fans direct access to the teams, allowing them to see firsthand the highly-skilled mechanics service their hot rods between rounds, and get autographs from their favorite NHRA drivers.

Fans also don't want to miss Thunder Valley's traditional Saturday evening FanFest, one of the biggest driver autograph sessions on the NHRA circuit that takes place in the pits 30 minutes after the final pro qualifying session. Bristol Dragway officials also will induct the latest honoree of the prestigious Legend of Thunder Valley.

Mello Yello Series qualifying for the NHRA Thunder Valley Nationals begins Friday, June 14 with Top Fuel and Funny Car sessions at 4:30 and 7:30 p.m. The final two rounds of nitro qualifying are set for Saturday, June 15, at 1 and 4 p.m. Final eliminations are scheduled for noon on Sunday, June 16.

Enough with the multi-colored neck ties and fancy pocket protectors, there's still time to purchase tickets and give your Dad an unforgettable Father's Day weekend experience. Weekend packages begin at just $84 while single-day Friday and Sunday tickets start as low as $35 for adults. Saturday adult tickets start at $50. Tickets for kids (12 and under) are free with a paid adult.

To purchase general-admission or reserved seats, call Bristol Dragway at (423) 989-6900. Tickets also are available online at www.bristoldragway.com and can be purchased in the Tri-Cities region at any Food City grocery store.